The R is an extensively used programming language among statisticians and data miners for developing statistical software. R language was designed as a statistical platform for data cleaning, analysis, manipulation, and representation. Way Back then, R was not a very popular programming choice, but now it has gained tremendous applications and traction. According to the 2017 Burtch Works Survey, out of all surveyed data scientists, 40% prefer R, 34% prefer SAS, and 26% Python.

The S language is often the driver programming language for research in statistical methodology, and R gives an Open Source route to participation in that activity.

R is the implementation of the S programming language combined with lexical scoping semantics inspired by Scheme.

R language was created by Ross Ihaka and Robert Gentleman at the University of Auckland, New Zealand, and is developed by the R Development Core Team (of which, as of August 2018, Chambers was a member).

R Language is explicitly designed to deal with data.  The R programming language is designed for the demands of the scientific research community.

The core of R is programming is an interpreted computer language that enables branching and looping as well as modular programming using functions.

R language allows integration with the procedures written in the C, C++, Python, .Net, or FORTRAN languages for efficiency.

R language is freely available under the GNU General Public License, and pre-compiled binary versions are provided for different operating systems like Windows, Linux, and macOS.

R is free software distributed under a GNU-style copyleft and an official part of the GNU project called GNU S.

R compiles and runs on a wide variety of UNIX platforms, Windows and macOS.

According to KDNuggets poll 2019, R Language stood at 3rd place in the Data Science language survey. 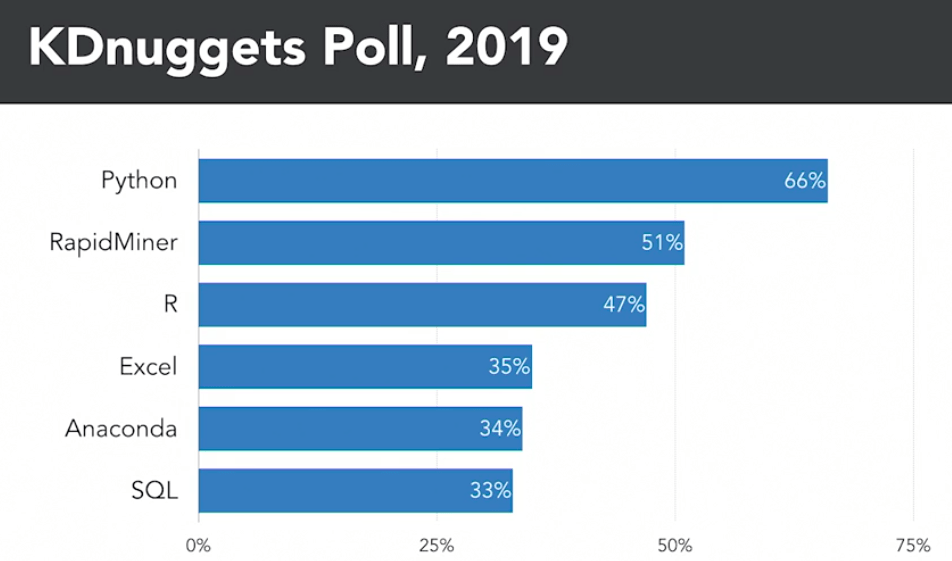 Python is a general-purpose programming language used in various IT developments. Here, you can see that R is stood at third place with 47% of developers are using when it comes to data.

R has consistently been at or near the top of data science languages, and some scientists consider a must-have language to be useful in the field. Essentially, if you’re going to be a severe player in data science, you need to have R as part of your toolkit.

When it comes to the Data Science language, we always have one question in our minds. Which is to learn Python or R?

Python is exceptionally robust in Machine Learning and data-centric apps.

R is powerful in data analysis and scientific research.

My first impression of R was that it’s just software for statistical computing. Good thing, I was wrong! R has enough provisions to implement machine learning algorithms in a fast and straightforward manner.

Each language has its strength and weakness against each other. Sometimes you have to learn both languages as a Data Scientist.

R Language has the following advantages.

First, there is a clear explanation of the process, and things are documented. There are also numerous tools for data wrangling and visualization. R has a huge community of like-minded peers. And last but not least, R is open-source and free.

Data science is an actual science, just like chemistry and biology and physics. To perform good science requires a good scientific method. Part of that method is being sure that the research finds its conclusion correct, and the research is reproducible and repeatable.

Data scientists have to be able to share not only their data but their conclusions and the whole process they used to reach those conclusions.

In contrast, R can document access to its original data set and the exact steps to conclude. With the original data and the initial calculations, conclusions can be reproduced and verified. You may disagree with the derived conclusions, but where they came from is clear.

The R programming language is well-suited for this type of documented process. Besides being popular with data scientists, R also has an immense library of tools and functions for many science applications. Likely, researchers have already created specialized data analysis tools in your specific field of research.

R is the integrated suite of software facilities for data calculation, manipulation, and graphical display. It includes the following.

The term “environment” is intended to generalize it as a thoroughly planned and coherent system, rather than an incremental accretion of concrete and inflexible tools, as is frequently the case with other data analysis software.

We think R is a great place to start your data science journey because it provides an environment designed from the ground up to support data science.

R is not only just a programming language but also it is also an interactive environment for doing data science. To support interaction, R is a much more flexible language than many of its peers. This flexibility comes with the downsides, but the significant upside is how easy it is to evolve simple grammar for particular parts of the data science process.

These mini languages help us think about problems as the data scientist while supporting fluent interaction between your brain and the computer.

That is it for the R Programming Language.