Graphs and charts are visual representations of the data. If you are working in the data science field, your goal is to make sense of the large data. The data analysis contains three processes.

Graphs and charts are incredible tools to simplify complex analysis. But before we begin, let’s understand some basic plotting concepts like scatter plot and correlation.

What is a Correlation in R?

The Correlation in R is a statistical measure that shows how two variables are linearly related. In simple meaning, they change together at a constant rate.

When the y variable decreases as the x variable increases, it is called a negative correlation between the variables.

A Scatterplot in R is a type of data visualization that explains the relationship between two numerical variables. A scatterplot pairs up values of two quantitative variables in a data set and displays them as geometric points inside a Cartesian diagram.

A scatterplot is a set of dotted points representing individual pieces of data on the horizontal and vertical axis.

To create a scatterplot, use the plot() function. Each dataset element gets plotted as a point whose (x, y) coordinates relate to its values for the two variables.

For a data set, we will use the shows_data.csv file. From that csv file, we will use Year and IMDb columns to draw a scatterplot.

To read a csv data in R, use the read.csv() function.

We will pluck the Year and IMDb columns to create a scatter plot.

Let’s create a scatterplot of 30 rows. 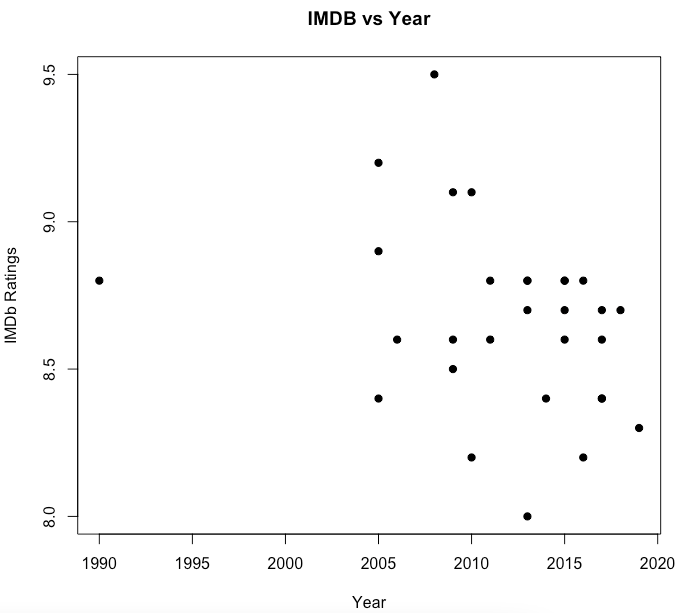 Woohoo, we have successfully created a scatterplot using the plot() function.

Use a built-in R dataset to create a scatterplot.

R provides many inbuilt datasets, and we will use the faithful dataset.

In the dataset faithful, we pair up the eruptions and waiting values in the same observation as (x, y) coordinates. Then we plot the points in the Cartesian plane. 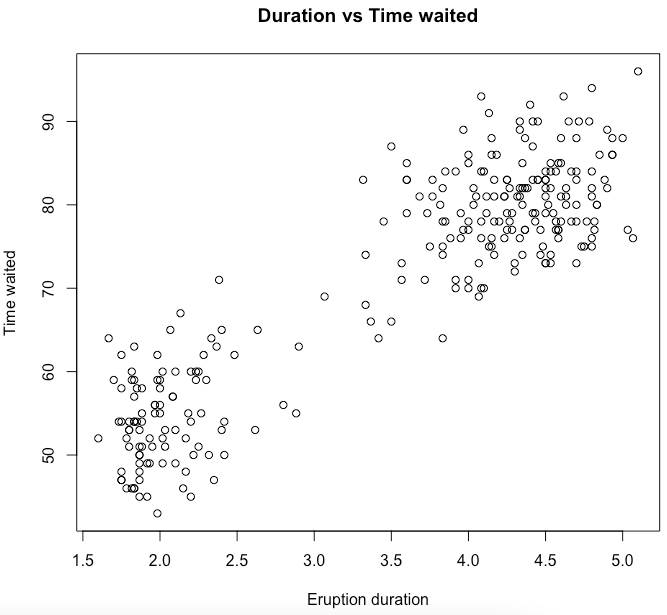 We can generate a linear regression model of the two variables with the lm function and then draw a trend line with abline.

Now, see the below complete code. 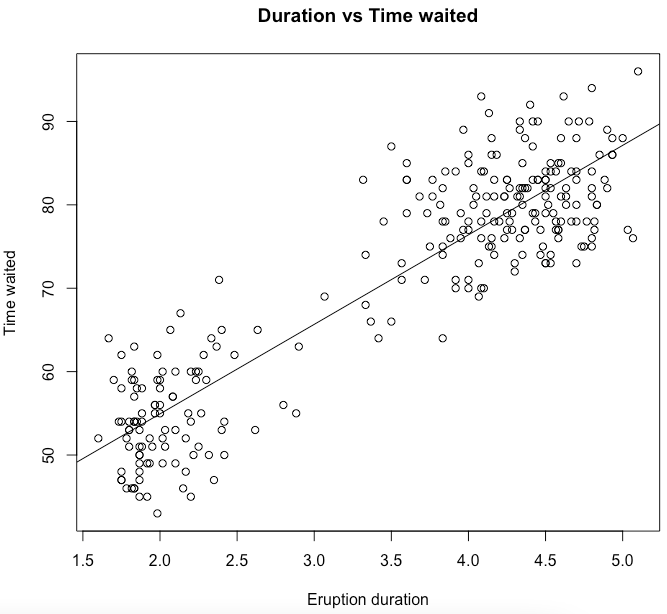 When we have more than two variables, and we want to find the correlation between one variable versus the remaining ones, we use a scatterplot matrix. We use the pairs() function to create matrices of scatterplots.

formula: It represents the series of variables used in pairs.

data: It represents the data set from which the variables will be taken.

Each variable is paired up with each of the remaining variables. Finally, a scatterplot is plotted for each pair. 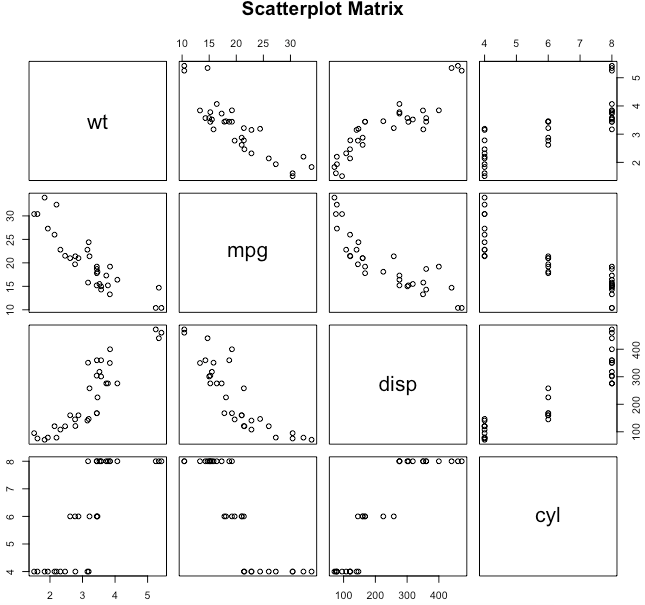 And we got the scatterplots for matrices. 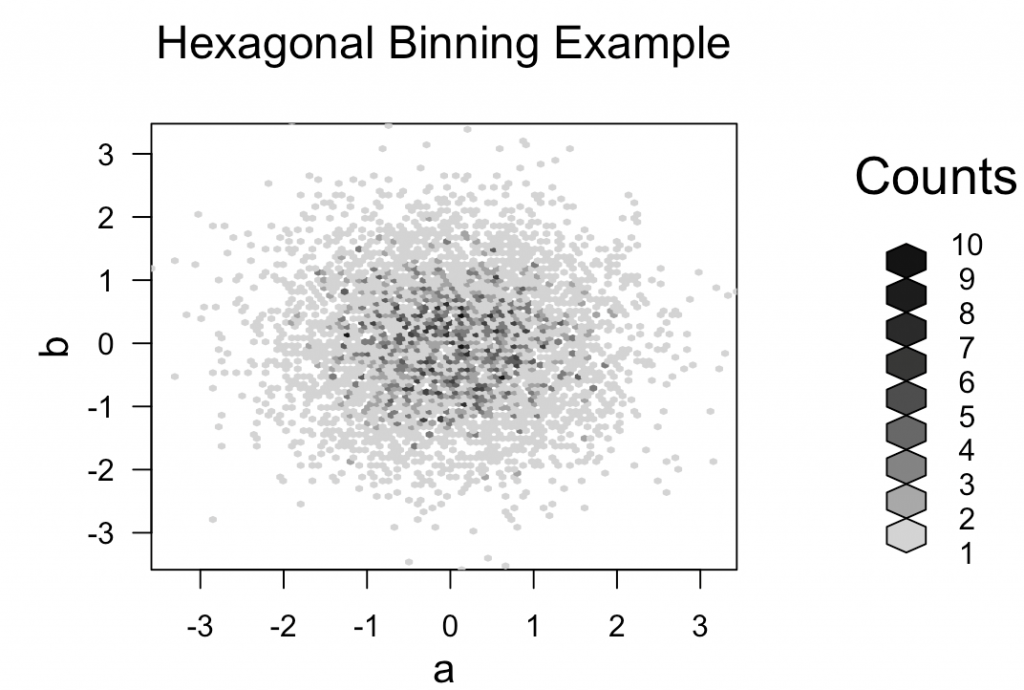 To create a normal distribution of data in R, use the rnorm() function.

In this example, you can see that in the specific area of the plot, if the hexagonal count is 10, then it is filled with black color which means that area of the plot has many data points which overlap each other.

In a plot, if the hexagonal count is 1, then it is filled with gray, which means it is less crowded and does not overlap each other. To represent all the overlapped data points in the chart, we used the plot() function.

For this example, we will use the built-in ChickWeight dataset. 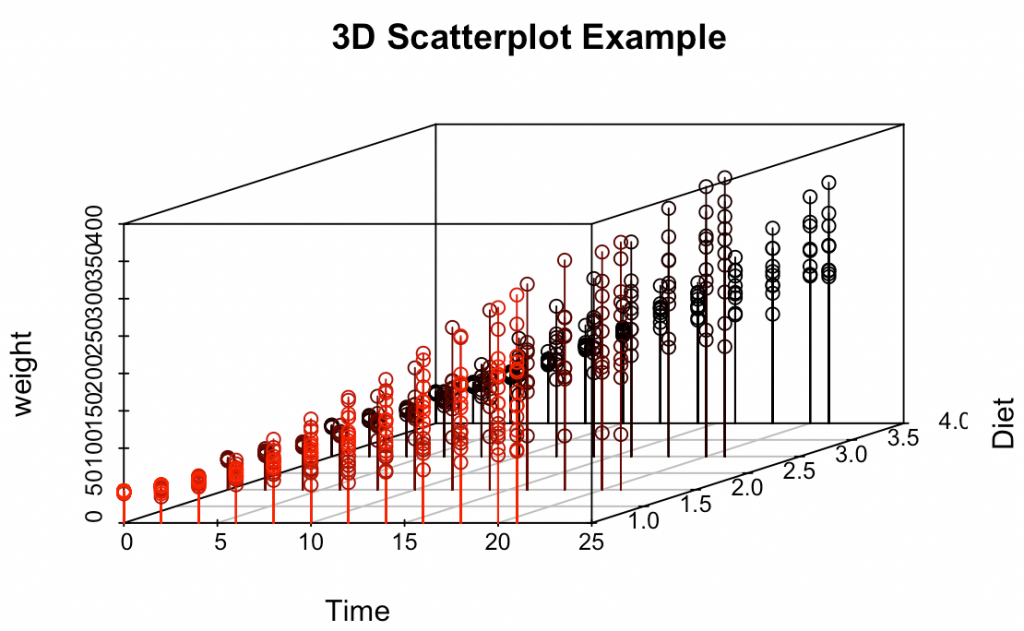 As you can see that we have created a 3D scatter plot on the ChickWeight dataset.

That is it for the scatterplot in R.

Krunal Lathiya is a Software Engineer with over eight years of experience. He has developed a strong foundation in computer science principles and a passion for problem-solving. In addition, Krunal has excellent knowledge of Data Science and Machine Learning, and he is an expert in R Language.